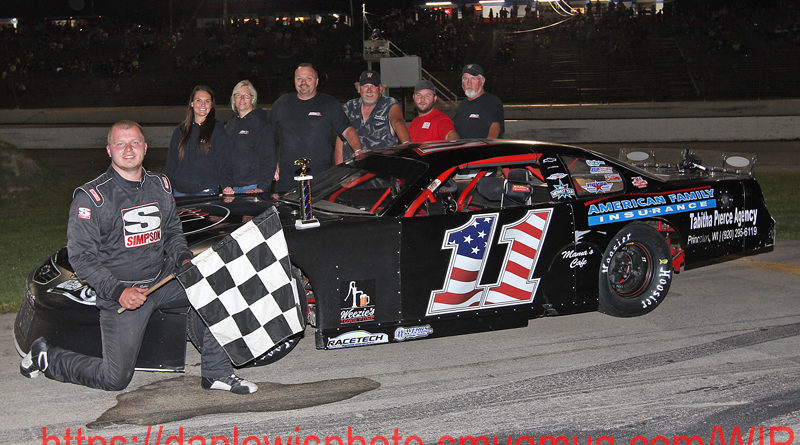 (KAUKAUNA, WI) July 23 –Montello’s Bobby Kendall snatched the lead from Lowell Bennett on the second lap and went on to win the super late model feature at Wisconsin International Raceway in Kaukauna Thursday. The victory was the third in four weeks for the second-generation racer.

Neenah veteran Bennett paced the opening circuit of the 35-lap feature with Kendall wrestling the lead away on the second round. During the next several laps Bennett stayed within two to three car lengths of Kendall as Jeff Van Oudenhoven and Jesse Oudenhoven began pressuring Bennett for second by lap seven.

By the race’s halfway points Kendall had built up a sizeable margin over Bennett and company, stretching out a near two second lead over the balance of the field.

Kendall’s big margin was wiped out on lap 30 when Freedom’s Brent Strelka looped his mount in turn four, forcing a caution and tightening up the field. With a four-lap shootout to the finish, Kendall picked up where he left off and collected his third feature flag in four weeks of racing. Bennett hung on for second in his best finish of the year. Oudenhoven took third. Fast timer Andy Monday sliced his way through the field from 12th to finish fourth. Eugene Gregorich Jr. rounded out the top five finishers.

Oshkosh’s Chase Randerson kept all challengers at bay to cruise to victory in the late model main. The win was his first of ’20. Trailing at the checkers were Brandon Reichenberger, Braison Bennett, Bryan Monday and Eddie Muenster.

Fond Du Lac’s Mike Byrge kept the lead through a restart with five laps remaining and fought off J.J. and Kasey Vanderloop to win the sport truck feature, the first of his career at WIR. J.J. and Kasey placed second and third, respectively. Kylee Vandermoss and Landon Braatz finished fourth and fifth, respectively.

Greenleaf’s Henry Neerdaels survived the twists and turns and a couple of red flags to score his second “Rockin’ Roval” feature of the season.

Next Thursday night July 30 will be Werner Electric Supply night and the ¼ mile late models will be back in action. Racing gets underway at 6:45 p.m. You can check frrc.us for more information or follow the club’s Facebook page.