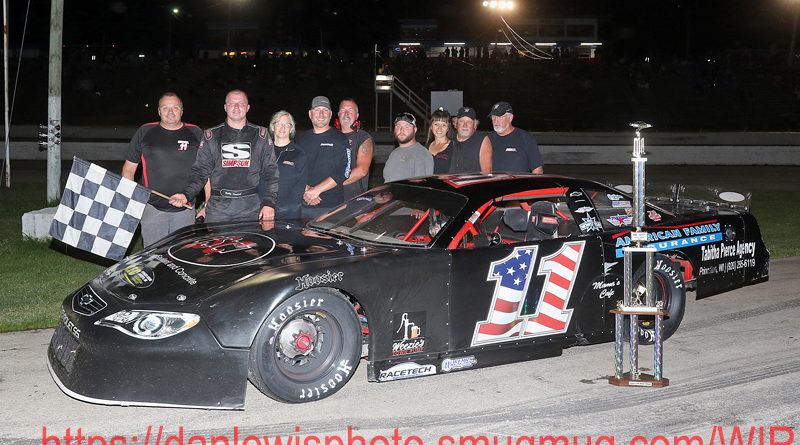 Kendall became the first in the division to become a repeat winner in the track’s sixth night of racing in 2020. With his win Kendall boosted his Red, White & Blue series points lead in the process.

The race was only one lap old when Rockford, Illinois racer Curt Tillman slammed into the outside retaining wall of the backstretch. After a delay racing resumed Jeff Van Oudenhoven shot into the lead with Kendall in tow. The pair broke away from the field slightly with Chad Butz three car lengths back in third.

Kendall ducked underneath Van Oudenhoven for the lead on lap 21.  Kendall quickly pulled away from Van Oudenhoven and built up a several car length cushion. Butz pulled into 2nd by lap 30 with Oudenhoven into third.

Kendall began sifting through lapped cars by lap 36. Butz and Oudenhoven waded their way through the lapped traffic to stay within striking distance of Kendall with Oudenhoven wrestling second away from Butz a few circuits later.

The red flag flew for a halfway break at lap 48 and when the race was attempted to get restarted Andy Monday was in the wrong place at the wrong time and got caught up in an accordian-like, chain reaction deal. His night ended off on the hook.

The next attempt to start the race was successful with Effertz shooting into the third spot. A Randy Schuler spin prompted another yellow. Kendall picked up where he left off before the caution with Effertz and Oudenhoven hot on his heels. Oudenhoven worked his way into second and began pressuring Kendall for the lead. However, in the final 31 circuits Kendall maintained a comfortable four car length cushion over Oudenhoven, Effertz and the rest of the field.

Kendall took the checkers with Oudenhoven, Effertz, Eugene Gregorich Jr, and Van Oudenhoven rounding out the top five finishers. The top ten cars finished on the lead lap of the 96 lap contest with 15 of the original 21 starters running at the end.

Appleton’s Scott Wolf padded his point lead in the Sizzlin’ 4 class by winning his third feature of the season. Trailing at the checkers were Faithorn, Michigan visitor Elliot Reid, Evan Beattie, Ethan Beattie and Arianna Beattie.

Next Thursday night July 23 will be LGH Lifting Gear Hire Veterans night. The Rockin’ Rovals will make their third appearance of the year. Racing gets underway at 6:45 p.m. You can check frrc.us for more information or follow the club’s Facebook page.