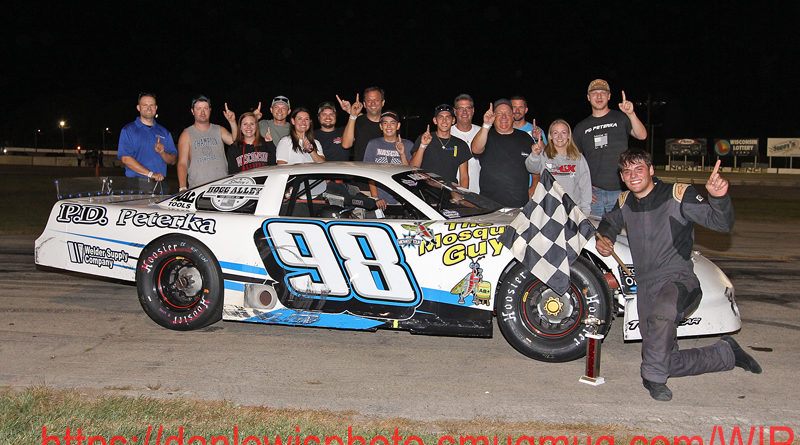 (Top four in SLM points all crash out in feature)

(KAUKAUNA, WI) August 20– Young R.J. Braun of Wales inherited the lead on a restart with five laps to go and hung on to win his first ever super late model feature at Wisconsin International Raceway in Kaukauna Thursday.

Mequon’s Randy Schuler outraced polesitter Taylor Vandermoss into the lead at the drop of the green in the 35-lap contest. The race was only three laps old when Darboy’s Effertz, who was leading the super late model point standings heading into the night, made contact with another car heading into turn three. Effertz racer then slammed into the outside retaining wall, drawing a red flag.  Effertz emerged shaken but uninjured but his car’s damage was significant enough that he was unable to return.

The contest was briefly delayed because the impact of Effertz’ crash knocked the traffic light pole down and it needed to be fixed.

After a brief delay racing resumed and Schuler maintained the lead for another two circuits before hometown driver Jesse Oudenhoven motored around Schuler to snatch the lead. Appleton veteran Van Oudenhoven and Van Oudenhoven whisked past Oudenhoven for the lead on lap six.

Van Oudenhoven began to slowly put some real estate between himself and the rest of the field when an amber flew on lap nine when the cars driven by Appleton’s Monday and Schuler made contact in turns three and four after Monday lost brakes in his machine, sending both cars spinning.

On the restart Van Oudenhoven picked up where he left off and kept a three-car length lead over Montello’s Kendall, who wrestled second away from Oudenhoven on lap 11. By the event’s halfway point Kendall began slowly reeling in Van Oudenhoven, closing the gap to three car lengths by lap twenty. With ten laps to go Kendall pulled up to Oudenhoven’s rear bumper and began pressuring the Appleton veteran. With five laps to go Kendall made contact with Van Oudenhoven going into turn three, sending both racers into the wall.

With five laps to go Braun inherited the lead on the restart. Braun fought off a late race challenge to win his first super late model feature at WIR. Oudenhoven hung on to second, followed by Lowell Bennett, Alex Stumpf and Taylor Vandermoss.

Despite the carnage and his 14th place finish Kendall maintained a two-point lead over Effertz at the end of the night in the points with Van Oudenhoven moving up to third.

Omro’s Brian Henry surrendered the lead to Chase Randerson with four laps to go – only to repass Randerson on the final circuit to win the caution free late model feature. The victory was Henry’s first of the year here. Randerson settled for second followed by Mike King, Braison Bennett and Bryan Monday.

Former super stock champion Dylan Wenzel of Fremont, who’s been racing part time in 2020, found victory lane on the quarter-mile, whittling his way through lapped cars in the final circuits to win his first feature flag here of the year.

Appleton’s Kylee Vandermoss sped away midway through the sport truck feature and was never headed as she captured her second win of the year here. Finishing second through fifth were Mike Byrge, Bobby Wautier, Jason Van Handel and Cody Vanderloop.

Earlier in the evening Menasha’s Gary Roehborn and Lockport, Illinois’ Larry Schuler, a former FRRC late model champion were ushered into the track’s Circle of Fame.

Next Thursday night August 27 it will be Viking Electric Supply/Legrand sponsoring the action on Rich Somers Memorial Night. The V6 Rockin’ Rovals will also be in action. On track action gets underway at 6:30 p.m. You can check frrc.us for more information or follow the club’s Facebook page.