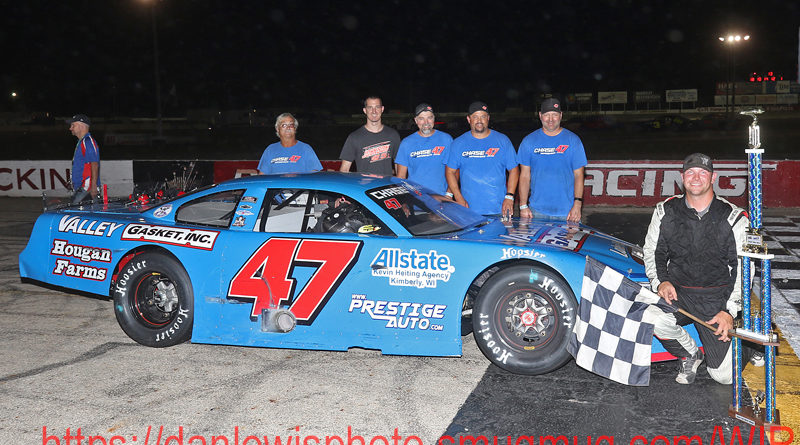 “The Maverick” Sawyer Effertz wrestled the lead away from Andy Monday on the second round of the 74-lap contest, which was stalled on lap four for a Jeff Holmgren Jr. spin after Holmgren collided with another car. When racing resumed a five-car pileup took place on the frontstretch involving the cars of Kris Kelly, Brent Strelka, Cory Manders, Pete Vandermolen and Mike Meyerhofer. A long red flag was out while the safety crews cleaned up the debris.

On the restart Jesse Oudenhoven rocketed into the second spot and began pressuring Effertz for the lead. The Kaukauna ace muscled his way past Effertz on lap six and had Johnson shoot into second and began keeping Oudenhoven in his tracks. Johnson pulled inside of Oudenhoven on lap fifteen and went toe-to-toe with the Kaukauna racer for the next several circuits. Oudenhoven was able to keep the top spot though the mandatory break with 34 laps remaining.

When the last half of the contest resumed 15 of the original 24 contestants were still running as Oudenhoven maintained the lead with Johnson second and R.J. Braun squaring off with Effertz in a side-by-side scrap for third. With 30 laps remaining Oudenhoven and Johnson pulled away from the field with Johnson with 29 laps remaining. Braun managed to squeeze past Oudenhoven for second with 20 circuits remaining but Johnson had built up a one second lead over second place. Johnson skillfully sifted his way past lapped traffic in the waning circuits to collect the win. Braun scored second in his first appearance of the year at WIR after closing the gap to a car length at the checkers. Oudenhoven, Effertz and Andy Monday rounded out the top five finishers. With his finish Effertz took over the weekly points lead, three marks ahead of Bobby Kendall.

Next Thursday night August 20 it will be Pierce Manufacturing Customer Appreciation Night as the ¼ mile late models will return. On track action gets underway at 6:30 p.m. You can check frrc.us for more information or follow the club’s Facebook page.