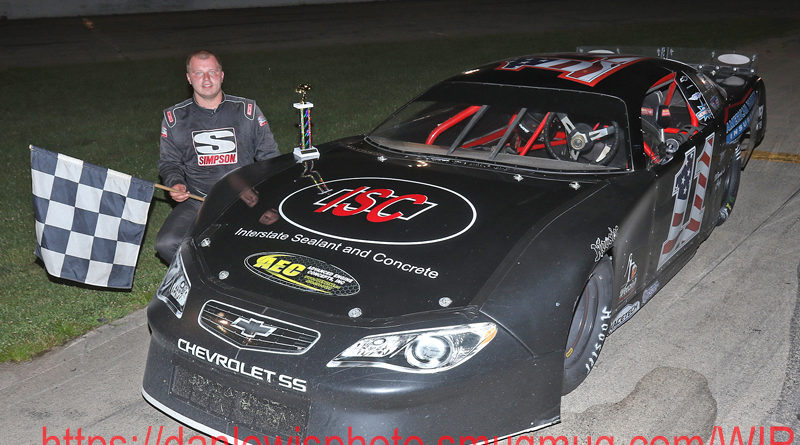 The victory was the third in a row for the second-generation racer and his fourth on the season here.

Freedom’s Brent Strelka outdueled polesitter Lowell Bennett into the lead at the drop of the green for the 35-lap feature. A caution flew on lap four for a Lowell Bennett spin in turn two. Strelka pitted under yellow and Darboy’s Sawyer Effertz inherited the lead on the restart. Three laps later Schultz dove underneath Effertz to battle for the lead.

The pair went door-to-door for the next several circuits, swapping the lead. On lap 11 Schultz motored ahead of Effertz to assume the top spot. Andy Monday broke through traffic to snatch second and began slowly closing in on Schultz.

The field tightened back up on lap 13 after a yellow for a Cory Manders spin. When racing resumed Schultz kept the lead but Kendall shot into second. The “Montello Missle” began pressuring Schultz in the high side, pulling alongside of him until a lap 15 red flag flew for a wreck on the backstretch involving Manders and Pete Vandermolen Jr. after the pair spun on an fluid spill from another car.

After a delay for cleanup racing resumed with Schultz and Kendall pulling away from the pack to settle the score. With 13 laps remaining Kendall sped past Schultz and kept the Reedsville Ace at bay to win his third feature in a row and fourth overall on the season. Schultz settled for second at the pay window, followed by Andy Monday, Jeff Van Oudenhoven and Alex Stumpf.

The first main event was won by Appleton’s Kevin Hebbe. The feature wins were the second of the year for both drivers in the division.

Omro’s Larry Raygo came out on top of a four car tussle to emerge triumphant in the super stock feature, his first here of the year. Trailing the veteran racer at the checkers were point leader Trevor Howard, Peter Wilz, Dave Meyerhofer and Ed Howard.

Freedom’s Cody Vanderloop dodged a couple of caution periods to score his second sport truck feature win of the year here. Vanderloop scored fast time and placed second in his heat, one spot away from a clean sweep for the evening.

Next week will offer two big nights of racing at WIR. On Tuesday night, August 4 the annual Dixieland 250 ARCA Midwest Tour super late models will be in action. NASCAR Cup champion Kyle Busch will be racing along with defending race winner – NASCAR truck racer and Seymour native Ty Majeski. A stout of field of 30-plus drivers is expected.  Two nights later on August 6, Appleton Breakfast Rotary Club sponsors the action. Highlighting the night will be the annual “Stan The Man” super stock race, honoring longtime racing legend Stan Gracyalny. The annual Pavement Pounder special for the local dirt sport modified racers will also take place. Racing gets underway at 6:45 p.m. You can check frrc.us for more information or follow the club’s Facebook page.